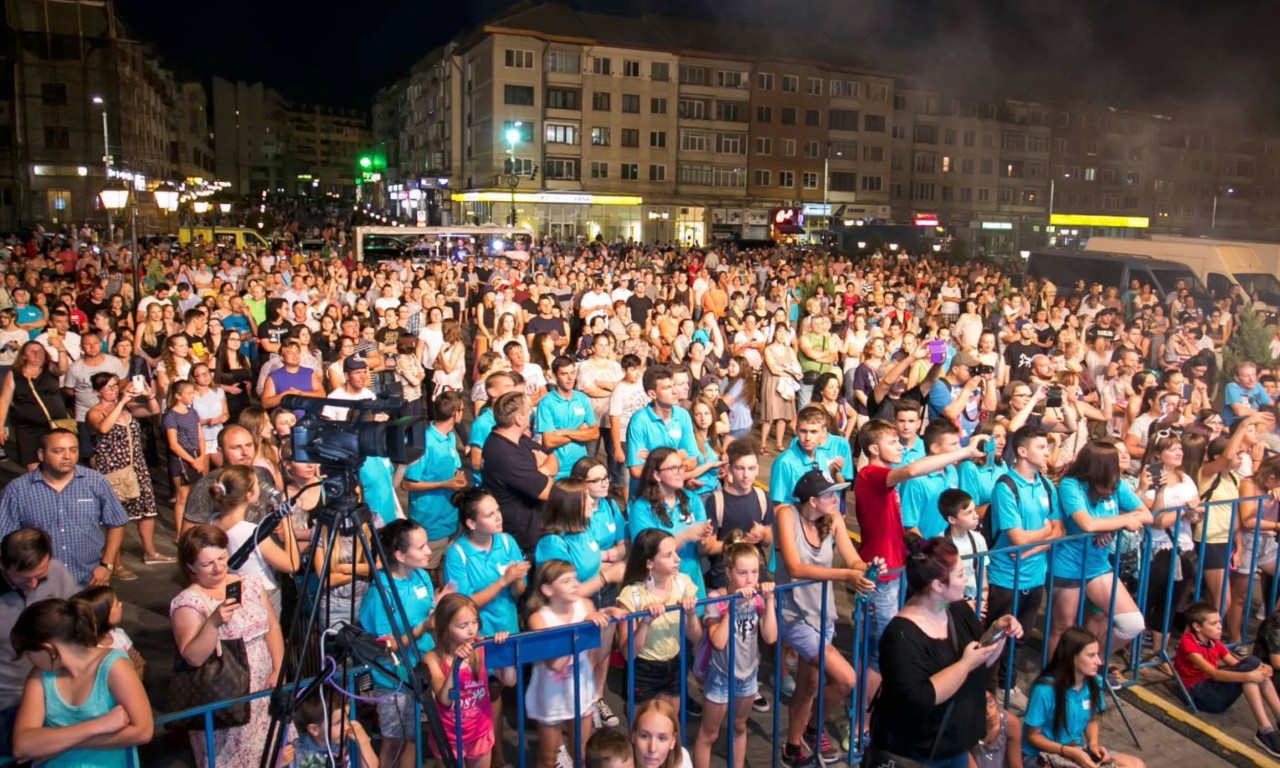 The flashing lights, loud music and the endless stream of people walking toward the central square informed everyone that they didn’t want to miss what was happening.  Word had gotten out to the street venders who came with their balloons, cotton candy and “covrigi”.  Kids arrived on rollerblades, skateboards, hoover boards and scooters.  Families filed into the square with little ones perched on their daddy’s shoulders.   It was a sight to be behold.

A stage rose high off the ground, splashing colored lights all around.  A megatron screen was ablaze with moving symbols pulsating with the beat of the music.  The steps in front of casa de cultura were packed.  Across the square people sang along with Proconsul, a known Christian band in Romania.  It was one great big summer party.  A party that lifted up the Name of Jesus.

We’ll never have an exact count of how many people came.  It was thousands.  A huge portion of the city.  Upgrade Suceava was bigger and better than anyone imagined.  It covered the city with a grand festive atmosphere.

You would have been so pleased to have listened to Razvan share his testimony, or Catalin (a former drug addict) talk about his changed life.  The music and program were Jesus focused.  Those who lined the streets while sitting at cafes or those who filled the area in front of the stage heard the truth.

In classic Campus Crusade fashion, one big event led to a filtered event.  The thousands on Friday became hundreds on Saturday at a second concert where they heard the gospel again. Upgrade Suceava was much more than a big light show.  It was a strategic outreach.

At the end of the two days there was a brief exchange between one of our staff and a church leader.  The conversation went something like this:

Staff: “Wow, this was a great evening.  I’m so encouraged.”

Church leader: “You’re right.  It was great.  But you know, people no longer come to evangelism like they once did.  Today the work is hard.”

That was a strange dialog.  Immediately after hundreds of young people had filled an auditorium to hear the gospel, one of our brothers was dwelling on past disappointments.  He was focused on efforts that failed.  The amazing example of success before his eyes was overshadowed by something chewing at his soul.  He had previously learned that – “people aren’t interested any more,” and despite what he had just seen, he was mulling over how difficult it is to connect with our audience.

Some times people don’t seem to be very interested.  They aren’t interested in sermons or church choirs.  They don’t want to go to a church.  But bring out a band, share the story of a changed life, explain how someone stopped using  drugs… well, those same people who “aren’t interested,” … they sat down at the café’s of Suceava and listened.

Upgrade Suceava was a big event, but its beauty isn’t found in its size.  Its power is not simply a result of its budget. There are cultural connections and important choices that made it great.  Social media broadcast our message in the language of this generation.  Everyone in the city was invited to volunteer and “make the city better.”    The gospel was package in the music that the majority of people listen to.

Put simply, when the people of Suceava where invited to “Upgrade” they found our message in the culture of their choice.  They were not invited to be spectators of evangelical culture that is foreign to them.

Upgrade Suceava demonstrated a principle:  When we draw close to our audience, it is fairly easy for them to draw close to us.  Upgrade Suceava was evangelism with a “millennial face.”  When the gospel was shared on Saturday the 25 minute message included 3 video clips and 38 slides.  People saw a picture of a bare chested Dwayne Johnson.  They thought about Gandalf and Daniel Craig.  They watched news footage of the winter protests in Bucuresti.  They saw the world that they are familiar with…and how Jesus affects it.

So, the question then is this:  “Are people disinterested in our message today?”  Or could it be that when we take a deeper step into their world that they might have ears to hear what we long to say?